With six teams having qualified from the initial group stage, the Final Phase – also known as the Hexagonal – of the 2017 edition of the U-20 South American Youth Championship is now under way. The first of three games which took place on Matchday 1 saw Colombia take on neighbours Venezuela. Below are video highlights, a brief summary of the game and, most importantly, @DarrenSpherical‘s armchair talent-spotting… 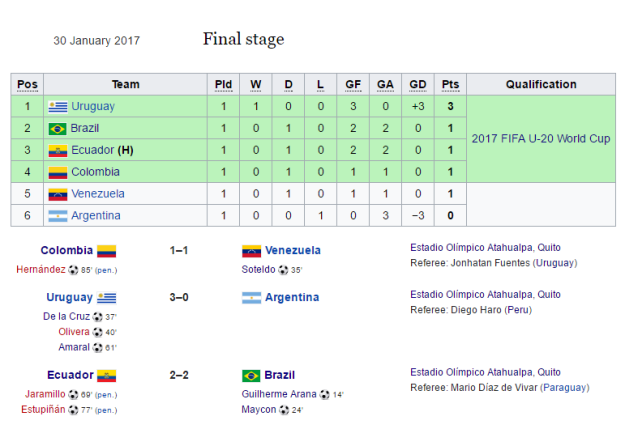 Venezuela came close to defeating neighbours Colombia, though were thwarted by a late equaliser. The first period consisted largely of half-chances until Yeferson Soteldo put La Vinotinto‘s U20s ahead with a finely curled free-kick. The second half saw more forward forays by Colombia but the win appeared to be Venezuela’s when Carlos Cuesta was sent off for a foul on Soteldo in the 70th minute. However, half-time substitute Juan Hernández hadn’t deserted the cause and with barely five minutes left won a penalty, which he then duly stepped up to convert to earn a draw for Colombia. Although on balance a point apiece may have been a fair result, the awarding of the penalty left many Venezuelans fuming, including senior internationals Salomón Rondón and Oswaldo Vizcarrondo, who both aired their views on Twitter.

As Juan ‘El Cucho’ Hernández (No. 10, América de Cali, on loan from Granada, Spain) started his second successive game on the bench, perhaps his manager was saving  him for future battles against – based on reputation, at least – stronger opposition. However, a goal down at the break, his presence was required and he was to emerge as the most significant player of the second half. His first moment of note occurred in the 56th minute when, on the right flank, Leyser Chaverra (No. 15, Universitario Popayán) headed towards him; instead of simply controlling the ball, Hernández displayed some ingenuity by swivelling off the ball and allowing it to run into his path towards the edge of the area before having a low strike parried at the near post. A few minutes later on the right just outside the area, perhaps due to a lack of options he decided to shoot, with his right-footed strike curling inwards before being parried away. However, his most significant contribution came with around five minutes left when he chased a long ball and was brought down for a foul in the area by the Venezuelan goalkeeper – even if the latter did also get a touch on the ball. Thus, he stepped up and confidently dispatched the penalty to gain his nation a point as well as solidify himself as his side’s most important player.

The majority of his team-mates were less visible though, particularly in the first half, the attacking midfield trio of Ever Valencia (No. 13, Atlético Bucaramanga), Jorge Obregón (No. 19, Unión Magdalena) and Luis Fernando Díaz (No. 17, Barranquilla) seemed the likeliest to get Colombia a goal. Indeed, after just two minutes, Valencia slid in Obregón at an acute angle inside the area, though his shot went wide. In the 23rd minute, Díaz stroked a pass to Valencia on the left inside the area and, had it not been for the sliding block of a defender, could well have put his side ahead. Lastly, after 33 minutes from the edge of the area on the inside-right, Obregón hit a well-struck drive that forced a good parry out wide.

The closest Colombia came to scoring in the first half occurred in the 25th minute when Michael Nike Gómez (No. 11, Envigado) robbed an opponent on the right then, from the byline, played in a low ball that was uncontrollably stabbed by a Venezuela defender from close-range, forcing his own goalkeeper into a good instinctive save. Otherwise, the only other moment of hope before Hernández’s arrival came just before half time when Eduard Atuesta (No. 20, Independiente Medellín) curled a 30-yard free-kick over the wall, requiring a low diving save from the goalkeeper.

He has been criticised for his lack of end-product but here, albeit from a static position, Yeferson Soteldo (No. 10, Huachipato, Chile) finally provided something of substance for his cheerleaders to purr over. Indeed, though some Colombians felt their goalkeeper could have done better, Soteldo’s 36th-minute free-kick was exquisitely curled over the wall into the back of the net. Otherwise, he was less successful from his other set-pieces and there was less midfield dribbling wizardry than has been the case, but he was nevertheless the man who was fouled in the 70th minute for Cuesta’s red card – had he not been he would have been one-on-one and, at a stretch, just about able to get a shot away.

Goalkeeper Wuilker Fariñez (No. 1, Caracas FC) made some routine stops as well as one decent first-half save from Obregón, though perhaps in this game more than any other, he gave scouts with an eye on him cause for concern. Indeed, he dealt with one cross unconvincingly (no doubt a rather common occurrence for a goalkeeper of 5 feet 9 inches) and, on another occasion, dallied outside his area by the touchline before being partly dispossessed and nearly fatally caught out. Most significantly, he committed the foul that conceded the penalty; while some argue that he got the ball first, he did nevertheless make contact with Hernández at virtually the same time with what was a rather clumsy attempt at intercepting. All the same, these things happen to the best and he has still only conceded two goals in five games – if, as seems likely, Venezuela let in at least a few more in their remaining games, one wonders if more shortcomings of his shall be exposed.

Otherwise, captain Yangel Herrera (No. 8, Atlético Venezuela) quietly impressed, on at least a few occasions displaying some neat footwork to shield the ball from opponents and, more generally, ensuring that Colombia rarely got too close for comfort – he has surely been emboldened by his seemingly imminent move to Manchester City.

Ronaldo Lucena (No. 16, Zamora FC) was once again a threat from set-pieces, though perhaps his two most notable crosses from these dead-ball situations came in the early exchanges. The first was in the 9th minute when his ball into the area from the left was headed on in space to Ronaldo Peña (No. 9, Las Palmas, Spain), who instinctively stabbed at the ball, but his effort was too close to the goalkeeper – had the latter a cooler head, he could well have found the back of the net though, to his minor relief, the flag was, in any case, raised soon afterwards. Lucena’s second decent set-piece came a couple of minutes later as his corner was headed, in a good position, by Williams Velásquez (No. 2, Estudiantes de Caracas), but alas, it went straight towards the goalkeeper, who caught.

Ultimately, it was nevertheless a fairly solid defensive performance by Venezuela and there was doubtless relief when Soteldo doubled his country’s tournament tally, though as both of these goals were from set-piece scenarios, fans will be keen to see more open-play attacking moves in their four remaining games.

The two subsequent games played on Hexagonal Matchday 1 were Uruguay vs Argentina and Ecuador vs Brazil – click to read talent-spotting articles for these encounters.

Otherwise, Matchday 2 of the Hexagonal will be on 2 February 2017 and the games shall be Colombia vs Argentina, Uruguay vs Brazil and Ecuador vs Venezuela – expect to see another bout of talent-spotting from these encounters on Hispanospherical.com.