The second game which took place on Hexagonal Matchday 4 of the 2017 U-20 South American Youth Championship saw Uruguay face Venezuela. Below are video highlights, a brief summary of the game and, most importantly, @DarrenSpherical‘s armchair talent-spotting… 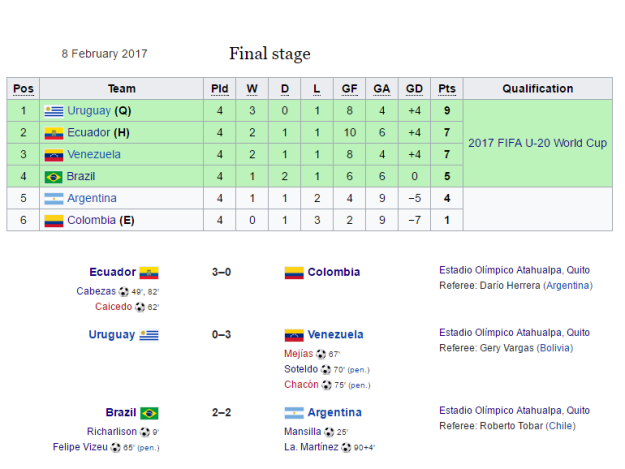 Despite being billed as Uruguay’s title-winning match, it ended up as a rout delivered by a very impressive Venezuela side, which now puts the latter in with an outside chance of nabbing the championship on Saturday. Indeed, they were well worth their victory as they edged proceedings from the off, even if Uruguay did end up having the two best chances of the first half – both of these came shortly before the interval, with one being a header against the crossbar. After the break in the 67th minute, Venezuela also rattled the woodwork with a header and, barely seconds afterwards, they took the lead courtesy of Josua Mejías’s low strike from an angle. Uruguay were still reeling from this four minutes later when Ronaldo Chacón was fouled in the area and Yeferson Soteldo converted the penalty for 2-0. Just five minutes later, roles were reversed as a crucial victory was wrapped up when Soteldo was fouled in the area and Chacón stepped up to make it 3-0 from the spot. Such was the delirium, even Antonio Romero receiving Venezuela’s fifth red card in eight games in the last minute could not sour the evening for the boys in burgundy.

Suffering their very first defeat of the competition and thus causing sudden, unanticipated doubt upon the ultimate destination of the tournament trophy, Uruguay had very little joy when going forward in this game. Indeed, they were continually thwarted by Venezuela’s well-organised defence, with their best opportunities coming one after the other towards the end of the opening half.

The first occurred in the 42nd minute when, from a free-kick on the inside-right, Rodrigo Amaral (No. 10, Nacional, Uruguay) surprised opponents by dinking the ball with his left into the area; this found Nicolás Schiappacasse (No. 9, Atlético Madrid) in space on the right yet he was smartly denied a goal by Wuilker Fariñez, who blocked his shot wide. From the resulting corner, Uruguay came even closer to breaking the deadlock as the cross of Nicolás De La Cruz (No. 11, Liverpool, Uruguay) was headed hard against the crossbar by left-back Mathías Olivera (No. 5, Club Atlético Atenas).

Otherwise, De La Cruz had a long range shot easily saved and put in another testing cross that caused some problems, but this was very much an off-day for Uruguay. They will urgently need to compose themselves and regroup ahead of Saturday’s clash with Ecuador as defeat could see the hosts instead claim the trophy – even a draw would prove insufficient if Venezuela gain a final-day victory.

With Manchester City-bound captain Yangel Herrera suspended along with two other regulars and three of the coaching staff including manager Rafael Dudamel, there were fears that Venezuela could implode. Instead, however, they produced a performance of sublime maturity as they were able to keep the heavy tournament favourites at bay before inflicting their first defeat upon them.

Two men who played a role in all three goals were Yeferson Soteldo (No. 10, Huachipato, Chile) and Ronaldo Chacón (No. 11, Caracas FC). Before they made their mark, they had been involved in some other notable attacks, particularly Soteldo. Indeed, in the 35th minute he did great on the right to take on a player before putting in a fine ball for Sergio Córdova (No. 23, Caracas FC), though the latter’s acrobatic scissor-kick went a couple of yards wide. Later, in the 55th minute, Soteldo did well over on the left where he ran into the area and cut the ball back from the byline but Chacón couldn’t quite finish it off, instead winning a corner.

12 minutes later, however, they made more telling involvements. Indeed, some 35 yards out on the right, Soteldo whipped in a fine free-kick that, from just inside the area, Chacón rattled against the crossbar with a header. Subsequently, the ball was then cleared before being knocked back into the path of Chacón on the inside-left some 35 yards out and he slid in Josua Mejías (No. 17, Carabobo FC) inside the area who, in turn, slipped the ball past the goalkeeper from an angle. Plucky Ronaldo Peña (No. 9, Las Palmas, Spain) may have celebrated as if it was his goal, but make no mistake, it was Mejías who gave Venezuela the lead. Just four minutes later, Córdova’s cross for Chacón in the middle of the area led to the latter being hauled down; thus, Soteldo stepped up to convert the penalty and double his country’s lead. Barely five minutes later, the roles were reversed as Soteldo dashed into the area only to be crudely brought down for a spot-kick which Chacón put away to complete the 3-0 demolition.

Otherwise, earlier Venezuela had a few minor chances to break the deadlock in the first half. In the 26th minute, the impressive right-back Ronald Hernández (No. 20, Zamora FC) did well on the right, taking on a defender and then shielding the ball from him to get a shot away from the right edge of the area, which the goalkeeper saved low. Four minutes later, Ronaldo Lucena (No. 16, Zamora FC) put in a good cross from the right which, in space, Peña got a head to, though this went comfortably wide. Lastly, three minutes later in the 33rd minute Lucena’s corner was headed goalwards by Williams Velásquez (No. 2, Estudiantes de Caracas) and hit Peña but though he was only four yards out, opponents swarmed and made it difficult for him to adjust his body to get a shot in.

Nevertheless, Mejías, Soteldo and Chacón were to be the goalscoring heroes and ensure that, barring a five-goal defeat at the hands of Argentina on Saturday, they have already qualified for the Under-20 World Cup. It is a tremendous achievement for this well-organised and talented crop of players – the first time since 2009 that Venezuela will have done so – and if they instead beat Argentina with the Ecuador-Uruguay game also going their way, they will turn even more heads by winning this competition for the first ever time. A nation can dream.

The two other games played on Hexagonal Matchday 4 were Ecuador vs Colombia and Brazil vs Argentina – talent-spotting articles have also been published for these matches.

Otherwise, the fifth and final Matchday of the Hexagonal will be on 11 February 2017 and the games shall be Argentina vs Venezuela, Colombia vs Brazil and Ecuador vs Uruguay – expect to see one last bout of talent-spotting from these encounters on Hispanospherical.com.