Following a brief tournament overview of Argentina’s performance at the FIFA 2017 Under-20 World Cup, below are some summaries of several players worth keeping an eye on. As this was far from a memorable campaign for Los Pibes, those seeking more information on these individuals may wish to also take a look at their respective exploits in qualification as well as, perhaps, this site’s preview for the Under-20 World Cup. 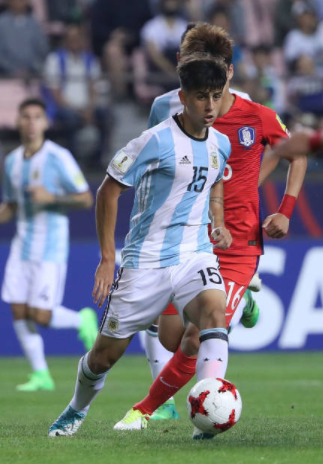 Once again, Los Pibes fell short on the global stage. Having scraped through qualification, manager Claudio Úbeda made several changes to the line-up for the opening clash with England and, for 30 minutes at least, it seemed as if his new-look side may just run riot. Alas, despite dominating possession, they conceded against the run of play and ultimately contrived to go down 3-0 in a somewhat peculiar defeat. They followed this up with a 2-1 loss against hosts South Korea, leaving their hopes of progression hanging by a thread. For the crunch game against Guinea, Úbeda finally started with all of his best attackers from qualifiying and this paid off as they performed a 5-0 demolition job. However, owing to results in other groups over the subsequent two days, they were narrowly denied one of the four best third-placed team berths and thus departed at the first stage.

Overall, though their goalkeeper and defence left much to be desired, they do possess several more attack-minded players of note, though whether any of these can ascend to the level demanded by this illustrious footballing nation, is another matter entirely. 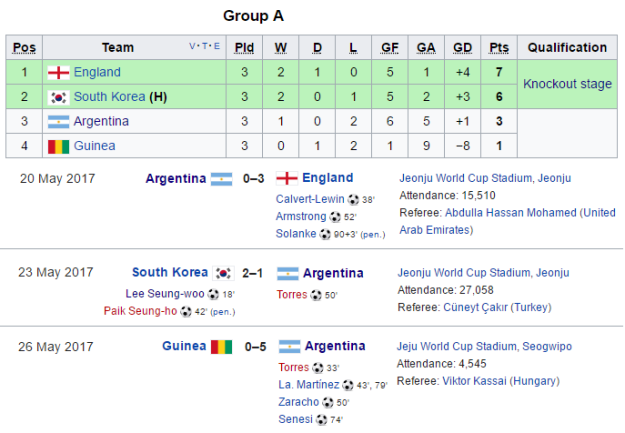 (Group A table and results courtesy of Wikipedia; to read about and view highlights of each game, click here and scroll down)

The star striker was hurt in the week leading up to the opening game against England, which likely explains why he only made it onto the field for 15 minutes of this encounter. However, given his contribution consisted mainly of an elbow which saw him red-carded and suspended for the South Korea match, he must have wished that he had sat that one out. Indeed, the man who has been banging them in at club level and linked with, amongst others, Real Madrid, was therefore to have little more than one game to demonstrate to the world why, were it not for him, his country wouldn’t even have made the trip. Nevertheless, when he returned against Guinea he would go some way towards bolstering his reputation as he bagged two goals. The first of these was a sensational top-corner golazo on the turn from the edge of the area and the second a well-worked move with a team-mate from a set-piece which he fired home.

Coach Úbeda appears to not be entirely convinced by Conechny – or is unsure how to integrate him into his similarly rotating plans – because, as with qualifying, Argentina’s topscorer at the Sudamericano Sub-17 two years ago started the tournament on the bench. Yet, when he emerged after 60 minutes in the opener with England, he again proved himself to be one of the liveliest players in the squad; for this, he was rewarded with starts against South Korea as well as Guinea. Thus, from both open play as well as set-pieces, in these two games he also came across as one of the likeliest scorers and/or providers. Ultimately, the San Lorenzo attacker – who has so far only been a substitute at club level – had to settle with just the one assist, a quick pass from a free-kick which bamboozled the unsuspecting Guinea defence and was finished off by Martínez.

He may not have been able to put in a string of vintage performances but he was at least afforded more opportunities than another impressive attacker from the qualifiers, Brian Mansilla (Attacking-midfielder, No. 11, Racing Club). Indeed, following on from two substitute appearances, the man Ajax put a considerable bid in for earlier this year was granted a solitary start against Guinea and gained an assist from a cross.

Santiago Colombatto (Midfielder, No. 15, Trapani, on loan from Cagliari)

Perhaps the most positive aspect of Argentina’s campaign was the emergence of this deep-lying playmaker. He did not participate in the qualifying tournament but nevertheless possesses respectable club experience, having played consistently in Italy’s Serie B this past season. He stood out from the off against England, heading against the crossbar and teeing up team-mates. His most telling Group A contribution occurred in the South Korea game when, from near the halfway line, he played a delightful first-time ball which was rapidly finished off to halve the deficit. In the final encounter against Guinea, he was also responsible for another assist, this time a low ball into the area which Martínez dummied over before a team-mate struck home.

The man Colombatto found with both of these passes was Torres who, with few headlines or hype, managed to maintain his goalscoring reputation, netting two to add to the five that he bagged in seven qualifying games. Having been subbed off on both of his starts as well as coming on from the bench against South Korea – with his goal arriving after being on the field for less than five minutes – he doesn’t appear to have as much backing as Martínez. Indeed, he also played, as well as had to contest a place, with Ezequiel Ponce (Striker, No. 18, Granada, on loan from Roma), who wasn’t part of the qualification team and also failed to get on the scoresheet, though did look particularly alert against England.

Lastly, the captain Ascacibar merits comment more because of the admiration he receives from the likes of Diego Simeone than his actual performances in South Korea. That is not to say that they were bad but, owing to his easy-to-overlook role and, in particular, the porousness and poor positioning of those behind him in the rearguard, it seems a lot harder for him to stand out at national level than it has been in the domestic league where he is a regular. Indeed, the errors of the goalkeeper and back four in the first two games put Los Pibes at a severe disadvantage and there is only so much that their midfield-roamer with the armband can do to rally the troops. Still, plenty in the game more qualified than your humble observer will tell you he is going places so, like most Argentines, let’s just agree to forget about this collective tournament showing and wait and see.