What began as one of the most highly anticipated matches in Venezuelan football history ended as one of the most memorable as with virtually the last touch Wilker Ángel silenced the raucous Caracas hordes to snatch a sensational Torneo Clausura title win for the hosts’ bitter clásico rivals, Deportivo Táchira.

The 22-year-old centre-back was far from the most predictable hero yet, having reportedly attracted interest from teams elsewhere in South America as well as Europe, whatever his future holds, he can be assured of a place in the folklore of Los Aurinegros. Only seconds before his last-gasp deed, the majority of the full-capacity Estadio Olímpico de la UCV had been booming out rhythmic chants of ‘Dale Ro’ (a contraction which in full would translate as ‘Come on, Reds’), anticipating Los Rojos del Ávila to be soon parading the Clausura trophy around the pitch following this final-day encounter. They had, after all, come into the game with 38 points to Táchira’s 40 and thus needed a win in order to lift the silverware – something they appeared to have achieved following top-scorer Edder Farías’ 80th-minute strike that put them in front for the first time in the game.

However, all of the euphoria that greeted this goal and then continued for the following 13 minutes was to be abruptly quashed in the fourth and final minute of stoppage-time. After one of several late, desperate Táchira attacks broke down, the ball was immediately hoisted from their half all the way back downfield. Bouncing into the Caracas area kindly for Yuber Mosquera, the Colombian remarkably hooked it over to his fellow defensive team-mate Ángel, who benefited from some lax tracking to head the ball in what seemed like slow motion past the frozen Alain Baroja. The home fans’ sudden loss of voice – with the exception of some stray horrified screams – was in stark contrast to the uncontainable roars of joy that could be heard in the distance at the opposite end of the ground. Like a magnetic force comprising of Táchira’s collective spirit, they were to attract Ángel, who dashed all the way back to his own half before falling onto his knees in front of them, raising out his arms Christ-like to embrace the acclaim befitting such a saviour. To no avail, one member of the Táchira backroom staff – who just seconds before was celebrating with arguably even fewer inhibitions – soon rushed onto the pitch to urge him back up and to ensure he maintained focus. Indeed, Ángel, smiling from ear to ear, was physically and mentally in dreamland. With the final whistle blowing almost as soon as the restart, his giddy lack of composure mattered not a jot as he and his team-mates were suddenly free to savour their breathtaking accomplishment on enemy territory. 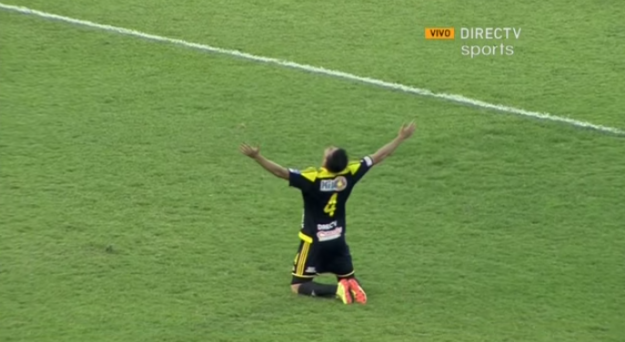 Considered as a whole, it was a fair result but that made it no less crushing for Caracas and particularly their goalkeeper, Alain Baroja. Indeed, having recently solidified his place as the national team’s second choice, he has been making strong claims throughout the campaign to become the future number one. Here, though he had no chance with Yohandry Orozco’s close-range volley in the 70th minute that rattled off the bar, he did particularly well in the 83rd minute to keep his side’s title dream alive. Firstly, he made a spectacular save from Jorge Rojas’ curler from the edge of the area and then made a dramatic double-stop from the resulting corner, initially blocking a header and then smothering Javier López’s rebound. Alas, as soon as Ángel’s header agonisingly bypassed him into the vacant opposite corner he knew that the game was up and could do little more than cover his crestfallen face with his shirt. Though he missed out on being the designated hero of the day by the tightest of margins, Baroja can at least be assured that his reputation has been further bolstered following this outing.

With the propensity for top South American talent to be snapped up after the earliest signs of promise, quite what the future holds for the likes of Baroja and his talented team-mates remains to be seen. The capital’s finest, with 11 overall championships to their name and a strong record of producing quality exports, are the most successful side in Venezuelan history and, irrespective of the final outcome, had a season to be proud of. Indeed, while they finished 2nd in the Clausura and 3rd in the Apertura, they accumulated the highest amount of points overall (70, to Táchira’s 64).

Nevertheless, while some – particularly those accustomed to European league formats – may quibble with the domestic structures that mean Caracas will finish the season empty-handed (barring a Copa Libertadores Qualifying Round berth), there can be little doubt that Táchira earned this Clausura title. Indeed, unlike Caracas, they were fighting on two fronts throughout, having to first qualify for the Copa Libertadores over two legs against Paraguayans Cerro Porteño and then play six, often demoralising, group games. These eight additional matches caused significant disruptions to their schedule as up until the closing stages of the campaign, they were to regularly find themselves two to three games behind their domestic rivals. This made their run-in comparatively onerous as before the 18/19 April weekend of league fixtures, they were four points behind Caracas with two games in hand and yet the five remaining matches they were to play over the final 16 days of the Clausura could scarcely have been tougher. However, with considerable stamina and character, they won the first four of these, starting with a 2-1 away victory at Deportivo La Guaira (who finished 7th, but were narrow runners-up in the Apertura as well as Copa Venezuela winners), then 2-1 at home to Deportivo Anzoátegui (finished 4th), a narrow 1-0 at home to last year’s champions Zamora (finished 3rd) and then a relatively comfortable 3-0 home defeat of Deportivo Lara (finished 5th).

With this final win in this remarkable string of results, they finally overtook Caracas and led them by two points going into the final encounter. As has been relayed, despite the manner in which the draw was ultimately achieved, they were far from unworthy of the result and were to approach the game with few visible signs of exhaustion. Indeed, capitalising on a misdirected header from Jhonder Cádiz, César González blasted them into the lead with less than a quarter of an hour gone and was to have no qualms about celebrating against the club he represented from 2005-07. Following this, although Félix Cásseres was to strike the hosts level midway through the first half with a pearl of a shot and Edder Farías put them ahead late on, Táchira more than held their own in terms of chances created and, were it not for the crossbar and Baroja, could have wrapped up the title in far less dramatic circumstances. Thus, Ángel’s goal, as heartbreaking for Caracas and unexpected for everyone else as it may have been, ultimately topped off a thoroughly well-fought campaign.

When all was said and done, from a neutral’s standpoint, this clásico del fútbol venezolano certainly lived up to the billing and was a fine advertisement for domestic football in this often overlooked South American nation. Not just on the pitch, but also in the stands as, barring the empty section to help effectively segregate these rival fans, the ground was full of spectactors and noise from the first whistle to the last. Barring a bottle that connected with the head of José Miguel Reyes on his side’s victory lap, the behaviour was also significantly better than was feared (according to the latest reports, at least, although quite a few knives were allegedly seized by police). No doubt this was aided by the many individuals who were reportedly on hand to keep a vigilant look-out for trouble: 600 members of the Policía Nacional Bolivariana (and their canines), 270 private security personnel, 150 members of the Guardia Nacional, the fire brigade and countless more.

Given that this derby once infamously ended with the Caracas team bus being commandeered onto the pitch and then set alight in flames, many who want to see the nation’s domestic game flourish will be cautiously optimistic following how events transpired this time around. This was in marked contrast to how the finale of the Torneo Apertura ended in the same stadium, when fellow tenants Deportivo Petare had their game abandoned after 52 minutes against eventual title-winners Trujillanos due to a lack of security to deal with some youths who were throwing objects from outside the perimeter gates and issuing threats.

Whether Venezuelan domestic football has really moved on in this area may take years to determine but nevertheless, next on the agenda for Táchira will be the two-legged Gran Final against Trujillanos, the winner of which will be crowned the overall 2014/15 season champions. The first leg will be the away encounter for Táchira in Valera on Sunday 10 May with the return game being played on home soil in San Cristóbal on 17 May. As their more modest opposition have lost a few key players since their December triumph, Táchira will be hot favourites to add another estrella to their crest and claim their eighth league championship.

To find out how they get on as well as to read a more broad look back at the Torneo Clausura please keep checking back to this site in the near future and, if you are not already, consider following this site’s affiliated Twitter account, @DarrenSpherical.